Don’t want to have, Marble Granite Caesarstone to break or Void the Warranty?

Have Marble Granite Caesarstone and want a Larger overhang than 300mm? Without risking Breaking the Stone Benchtop in your Kitchen or Worse VOIDING your Warranty?
THE STONE GUY have been at Work and WORKING Hard. To give you a viable, cost effective and easy to implement. Into existing Cabinet Making Technics. Does not matter if you are upgrading your Kitchen Benchtops to Stone or your having a Whole NEW KITCHEN installed.

You can even have the MAGIC of a Cantilevered Kitchen Benchtop in Even Marble Granite.

Engineered Stone including Caesarstone and other brands. Warranty is not affected if the Overhang supports are installed to our guidelines & recommendations. Because everything is still supported as per the Major Engineered Stone Manufacturers’ such as Caesarstone.

Do you want to use a Full Slab of Marble Granite Caesarstone or similar Stone as an Island Benchtop?

The Stone Guy has the solution for you. Even if you only want to go to, 1000mm Stone Benchtop. On a Standard Island Benchtop Cabinet you would have 400mm over hang which would be too much for Marble Granite and Caesarstone type products normally.

With our System you can and right upto the full slab width.

What Additional Requirements are Needed?

Your Island Benchtop Cabinets need to have the proper adjustable Legs or better still the Standard Kick Panel Construction. Both of which need to be BOLTED to the Substrate aka your FLOOR!. As you are creating a CANTILEVER on the Island Bench. There are tipping forces at play so you don’t want the Island Benchtop and Kitchen Benchtop to Topple over.

The Stone Guy requires that additional bracing is done to the Gables of the internal cabinets of the Island Bench – aka bracing. Double Gables are fine and standard practice from the better cabinet makers. We suggest using a Double Rear Panel. We also require a SOLID TIMBER RAIL usually Pine. Which can be vinyl wrapped to suit your cabinetry, fixed to the front edge as it normally would be with a cross brace where our Cantilever Braces are going to sit. Our Island Benchtop Supports are a great choice for supporting Heavy Benchtops such as Marble Granite, Engineered in an application where no sub wall exists. With the benchtop extends directly off the base cabinets.

They Must be Tough?

Our Island Benchtop Supports are!  They are made solid steel measuring on 12mm thick and 65mm wide 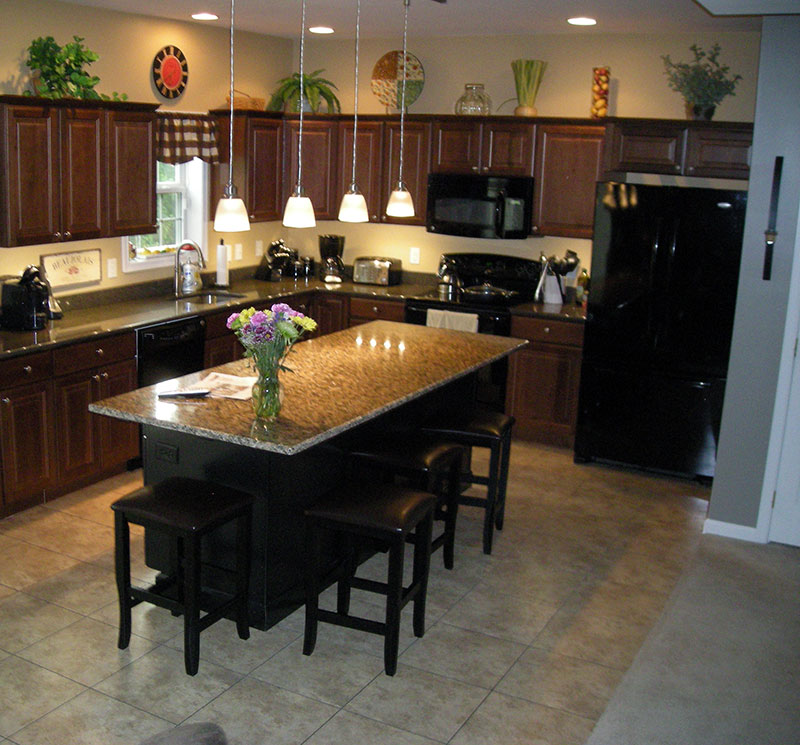 . Running through the cabinet Carcass, extending the length of the overhang. Minus either the approved overhang for the product or level it back 70mm  so it stays from view.

Base of the Support the Flange mounts via two screws (the screws are provided with the Benchtop support) to the inside of the cabinet face frame. The flange is short, hidden from view and does not interfere with the operation of the drawers.

The installation is a very simple process. A 12.5mm x  65mm slot is cut in the rear of the cabinets Carcass and finishing panel for the brackets to rest in. The brackets are then attached to the cabinet by way of a small flange with two screws. The flange is short enough so that it doesn’t interfere with the drawers or doors.

The Island Benchtop support runs through the cabinet and rests in a 12.5mm x 65mm notch in the back side of the cabinet. To support the ends we use our patented Island Extension Brackets that are mechanically fastened to the adjacent Island Bracket allowing us to support overhangs on up to three sides of the Kitchen Island. The island support system can also be modified to support an overhang on all four sides of an island.

Are the Overhang Supports available for Customisation? 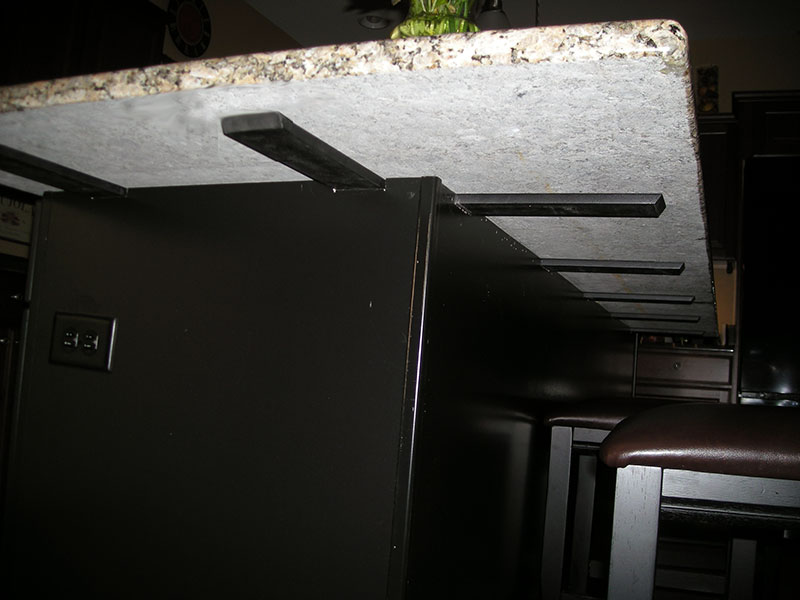 Available in Lengths from 210mm to 450mm for High Tops.(includes stub wall width)

Available in Lengths from 410mm to 1240mm for Island Benchtops. (include cabinet width)

The Measurements are for overall dimensions. If you wanted a Stone Benchtop to over hang 600mm on a standard cabinet carcass of 600mm. Total length of Island Support would be 860mm – that would be our IS34.

Are they available in Colours?

No they are Engineered to do their job.